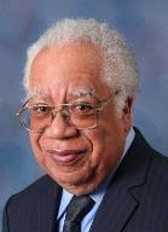 The tradition of our Ancestors requires that the people speak the departed into the afterlife by speaking the life they lived.

In remembrance of Joseph L. White, The President of the ABPsi, Huberta Jackson Lowman, our BOD and membership dedicate in remembrance that

In life, Joseph L. White was the first African American to receive his doctoral degree in Clinical Psychology from Michigan State University in 1961; had a distinguished career as a professor, the last twenty seven (27) years of which was spent as a professor  of psychology, psychiatry, and comparative cultures at the University of California Irvine;

In life, Dr. White’s seminal article in Ebony magazine in 1970, “Toward a Black Psychology,” was instrumental in both beginning and helping to define and frame the discourse in the modern era of African-American and ethnic psychology;

In life, Dr. Joseph White was a pioneer in the contemporary field of Black psychology and is affectionately referred to as the “Godfather” of the Black psychology movement by his students, mentees, and younger colleagues;

In life, Dr. White’s professional style and posture involved incorporating the elements of creativity, improvisation, resourcefulness, spirituality, and a belief in the value of direct experience into his style, his track record and tremendous legacy are the scores of young people, brilliant students and early career professionals he guided through his self-described “freedom train” that is not only unparalleled but a model for others to follow;

In life, Joseph L. White was a founder of the early EOP programs in the State of California, the founder of UC Irvine’s Counseling Center, and used his political influence with then California Speaker of the House Willie Brown to help deliver UCI’s medical school in the mid 1970’s;

In life, Dr. White was among the first academic scholars in the modern era to call into question the practice of using Eurocentric paradigms to understand and characterize the lives of people of African descent;

In life, Dr. White taught thousands of students, counseled scores of patients, lectured throughout the country, contributed to the anchoring of Head Start  Programs throughout the State of California, and reframed the discourse on an academic discipline that is well over 100 years old;

In life, Joseph White stood on the side of social justice, and directed  his clinical and academic endeavors with visions of hope and possibility for transforming dark yesterdays into brighter tomorrows;

In life, Dr. White authored and co-authored seminal papers and books including  The Psychology of Blacks:  An African-American Perspective (1990; 1984),The Troubled Adolescent (1989), Black Man Emerging:  Facing the Past and Seizing a Future in America(December 1998), and co-authored with Dr. Thomas Parham and Adisa Ajamu the Psychology of Blacks (3rd and 4th ed) as well as the 2006 Edited volume with Dr. Michael Connor on Black Fathers: An Invisible Presence in America;

In life, Dr. White is a recognized and celebrated psychologist and academician who  has received the Distinguished Psychologist Award from ABPsi, The Helms award for mentoring from the Winter Roundtable Conference, the Citation of Achievement in Psychology and Community Service from President Clinton in 1994, honorary doctorates from several institutions, and recognition from San Francisco State University as Alumnus of the year in 2008 and Michigan State University for the significant contributions he has made in his Life and professional endeavors;

In living, as a Founder, Elder, and Distinguished Psychologist, Joseph L. White was touched by the spark that ignited the collective impulse of Black Psychology. He fanned the flames of Black Mental health; contributed to the sacred charge of building for Eternity; and personally climbed the Baobab tree to greatness.

In speaking the life, he lived, The Association of Black Psychologists is honored to celebrate the life of our Mzee (respected elder) Dr. Joseph L. White and extend a special thank you to his family for loaning him to the profession and the world.

In this Remembrance Dedication, we, the ABPsi, wish Joseph L. White, Godspeed as he transitions to the realm of the Ancestors and lives amongst the Dwellers of Heaven. ​